I support a worldwide reduction on meat consumption. If you're not avoiding meat entirely, flexitarism or semi-vegetarianism still helps the planet without having exemplary discipline. Any reduction in meat consumption counts so a lot of people are moving in that direction with varying speeds. For this series, it was logical to add a meat in the poutine like we often do ourselves in Quebec with Montreal smoked meat or with the Galvaude poutine that has chicken. Meat has had an important place, if not essential, for certain populations. Searching about a nation's prefered meat or meat substitute tells a lot about agriculture, territory, history and traditions. With 20 poutines out of 21 that have meat in this series, it does feel like it's very meat-centric but it's not the message I want to send and not how I feel in everyday life.

The concept of this series relies on cultural exchange under a comedic lens. It's obvious that the interdiction of this cultural exchange and fusion happening would mean this series couldn't exist. A poutine couldn't be created using local ingredients and derived of emblematic meals of a given country. The same can be said about poutine itself. It's more than a meal in Quebec and the poutine is elevated to national symbol. To see a poutine in a restaurant, in a bastardised form, with any cheese and/or described as a traditional Canadian meal can be annoying, even infuriating to some. Overall I have to side with acceptance of transformed recipes existing without diminishing the real traditional recipes. Local emblematic meals will be transformed, as well as poutine, with the goal to expand knowledge on some countries. I saw this as opening doors instead of closing doors.

I also want to specify that I present myself as a character in this series. It's not me, Olivier, who travels and ignores incredible panoramas to obsess on poutines in places where there shouldn't be any. It's a little critique of tourists who go abroad and constantly try to reproduce an experience they can have home. It's a bad habit but often caused by inconfort and loss of points of reference. I did want pizza and burgers from time to time on the road but nothing like it's presented in this series. Truth be told, it's super annoying and sad having a travel partner who is constantly looking for junk american food instead of local flavours.

We've spent 1 year on the road and around 1 month in every country visited so we talked a lot with locals. In certain spots, like in Myanmar, the friendship was such that, yes, I choose to wear a longyi based on the information I had gathered and encouragement received by locals. Wearing the clothing that everyone was wearing was infinitely better than frowning upon it. It's also mandatory to wear a longyi on certain sites (imposed in Malaysia is some spots too but for different reasons/religion). If you're not wearing one then you have to grab one of the communal ones and wear it over your pants. Clearly, you're better off learning how to properly tie and wear one.

On pronunciation of words in other languages:

Based on my own experience in Québec, I appreciate when a tourist tries to say a few words in French. It's a sign of being open to languages, open to the local culture even if it makes the conversation extremely ephemeral for lack of understanding each other. I also appreciate when French speakers from France or elsewhere incorporate Quebec slang in their vocabulary. It sound right. Language is flexible. In Australia I've adopted the Aussie expressions that I use generously with my non-Aussie accent. In this lens, I've decided that I was going to try to pronunciate words in Mandarin, Cantonese, Vietnamese, Finnish, Russian, etc.. Sorry for the mistakes, I thought it was still better to try than to pronunciate with my Quebecois accent or simply ignore the words. 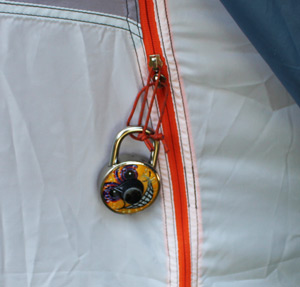 Now that the more serious stuff is out of the way, here's the lighter stuff that everyone asks at some point. All in all we spent around $35-$40 per day per person for 2 for a year of travels. Some spikes in spending generally occured when it was time to shoot one episode. It's crazy the amount we spend just living at home in one place. Calculate rent, mobile phone, landline (I had one), utilities and you'll realise this stuff adds up quickly. If you can get rid of it all for travels then you end up spending LESS per day than before. It's just crazy like that and here's how to maintain it, because yes, there are sacrifices:
- In order to see everything confort is secondary. Bunk beds and super cheap rooms is the way to go. And you meet people so it's not all bad. In Iceland and Stockholm it's so expensive we camped. You can appreciate the security on our tent
- Public transport. We didn't use taxis and would learn about bus routes even in places like Bangkok where it's nightmarish. Some places we had no choice to use tuk tuks but negociate everywhere without being too harsh and you should at least avoid paying extravagant prices.
- Long distance transport: slow night busses so you sleep at night in the bus during a 10 hour ride make you save on accomodation. Take lowest class with trains. Slow overnight trains were also a great solution.
- No sim cards. That one may seem scary and not as current as years passes and the process of buying a sim card has eased up everywhere but we didn't buy a single sim card in any of the 14 countries. Accomodation had our internet needs covered and I would save offline maps, save wikitravel/wikivoyage entries, grab paper maps and memorise the rest in the morning before leaving for the day.
By doing this we were able to pay the entry fee on any epic activity we wanted, had decent meals every day (except in Stockholm) with some premium meals spread throughout and didn't have to really hold up on beer and nightlife (except in Stockholm). Choices.